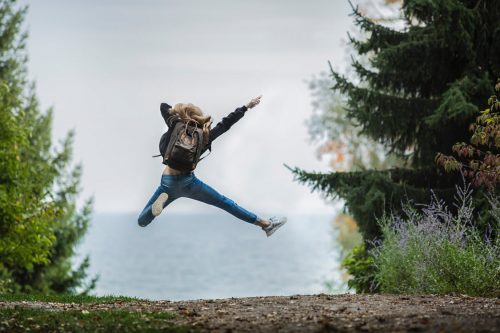 Core reason for unhappiness is setting unrealistic life goals. It creates burden on shoulders and kills our joy and happiness. In order to be happy, setting realistic goals is vital.

Wealth and happiness are not related:

I have tried to figure it out what exactly hinder our happiness, I have not find any direct relationship between happiness and wealth and prosperity. The latest figures released recently by World Bank recently show that global poverty level has reduced by half over last 30 years, which implies that the poverty level has now dropped below 10%. Bloomberg reports that the wealth and purchasing capacity of American people at present is more than ever before. However, all the reports and statistics indicate that American people have been less happy. United Nations Happiness Report 2017 suggests that happiness in the United States is declining. In an interview with International center for Finance, Yale University, Jeffrey Sachs, head of the Sustainable Development Solutions Network asserts, “my country, the United States, which is very rich, has gotten a lot richer over the last 50 years, but has gotten no happier.” This is likely to be the picture too in other countries around the globe.

Despite having increasing wealth people are not becoming happier because core source of unhappiness is not eliminated. There is no measurement how much wealth can make a person happy. It depends on one’s expectation. I am convinced that setting goal and failure to reach the goal is constantly hindering our happiness,

The process of setting goals in life is never ending because people often set new goals even after people achieving their goals. We set mainly result-oriented goal and we take it so hard that we are always in anxiety and tension. I agree that pursuing goal gives motivation. It could be possible to be happier if attaining the goal is possible. When we reach our goal, then we seek another goal with hope to be happy. In this way, we are caught by the habit of setting goals continuously in our lives. The mindset for reaching goal is not fun; it becomes burden on our shoulders

Not many reach the goal:

Some researchers have identified ten things that make us unhappy while others have identified five things. However, I find mainly one thing that hinders happiness, and this is setting a goal in life. Setting a goal is seen a positive thing by majority of the people, but I do not see that in same way. Forbes reports, that research conducted by University of Scranton shows, only 8% could achieve the new year goals they set while the other 92% do not and thus are left in frustrations of failing to achieve their goals. Many people do not reach goal that lefts many people unhappy.

As human beings, we are naturally driven by ambition. My primary school teacher once asked us about our aim in life. Every boy and girl in my class had an aim in life. Some wanted to become billionaires, some had ambition to become doctors, and some wanted to become famous singers. However, none of us seemed to evaluate the possibility of achieving that aim. In other words, we do not evaluate if we are capable of reaching ours aims. As a result, we realize with time that we may not reach our aim. That realization makes us sad and frustrated, and if we take it seriously, and if we focus too much on achieving that aim, we become constantly worried and thus the worry becomes a burden.

Goal setting theory and my own experience:

Locke’s Goal-Setting Theory process goal that suggests what you want to do and how you execute strategies to achieve a goal is applicable for companies that every year provide their outlook and set strategies to accomplish that. I have not seen that many people set process goal in their lives. Even if they do, it would make their lives boring and behave like machines if they follow the daily routine. Even all successful companies are careful to guide their outlooks. If target is not achieved, then share price tumbles. These kinds of high aims or target setting upset our lives. Last year, I was working for Danish Refuge council among the Syrian refugees who were crossing the Danish border. I counseled many them who clearly expressed their unhappiness in Denmark. Their target was to be accepted as refugee in Sweden but they were unfortunately stuck in Denmark. They arrived in one of the most peaceful and prosperous country but they remained unhappy because they could not reach their target destination. I was not surprised because I had the same feeling some years ago. I did use my personal experiences to help them and it worked.

Goal gives motivation but not happiness:

It is possible to attain a goal for material gains but attaining a goal cannot bring about happiness. Some experts suggest, that wanting to be happy can make you less and if you explic\itly and purposely focus on happiness that appears to have a self-defeating quality. More often than not, we do not set our goals based our own desires. Instead, we set goals in our early lives based on the desires of our parents and we are later influenced by conventional notion of achieving things that offer social prestige. In other words, we set our goals to compete with others. However, it is important to note that when we set goals based on desires that are not our own, it makes us frustrated and unhappy. In addition, we undermine our own desires in the process of pursuing those goals.

What should we do:

The main drawback of goal setting is there are many unknown factors in future. In so fast changing society we are living now, we can hardly predict future. That is why long-term goals often fail. If we press us to stick to our goals that create constant mental burden.

As alternative setting long-term goal, we can set a number of short terms goal. Those goals are easily achievable and do not involve lot of uncertainties.

You have to know what you are capable to do. Then you can estimate what you can accomplish. “To know thyself is the beginning of wisdom.”- This is quote from Socrates. When you know yourself then you can your own guidelines that includes your goals. Speaking about myself, I use yoga to concentrate and learn myself.

Goal setting is not the only thing that determines our happiness. Happiness has many elements like positive emotions, relationship, accomplishment and gratefulness. Eliminating goal alone will not all our problems.